As I explained in yesterday’s post, I’m participating in this year’s Advent of Code challenge, with the twist of doing the challenges in T-SQL. In case you don’t know what “Advent of Code” is, Eric Wastl (t) created it for the purpose of, as Eric describes it:

Advent of Code is a series of small programming puzzles for a variety of skill levels. They are self-contained and are just as appropriate for an expert who wants to stay sharp as they are for a beginner who is just learning to code. Each puzzle calls upon different skills and has two parts that build on a theme.

We started of with someone going back in time and altering Santa’s past. You went back in time to correct it, but the device to fix the problems hadn’t been calibrated before sending you on your way. You calibrated the device on Day 1.

Today, you made it to your first destination. You overhear workers talking about workers have lost everything for a new prototype Santa suit. You overhear that the fabric would be in the warehouse, in two boxes with similar Box IDs. So you sneak into the warehouse and scan all the likely Box IDs. This list becomes your input file for Day 2, and it looks like this: 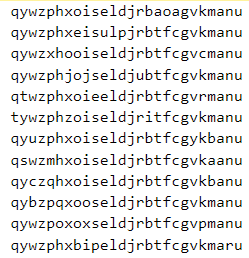 Analyzing this, you will need to split each line apart into separate rows for each letter, count the number of times that each letter occurs, and then determine if there are any letters that occur exactly two or three times in that string. Finally, sum up those values for all of the rows, and multiply the values together.

The first thing to do is to load the file and split it apart into a separate row for each box ID. We will split the Box ID apart letter by letter, and then put it back together. Additionally, we will store a unique number for each Box ID, and the length of that Box ID. The code for accomplishing this is:

Next, we need to split each Box ID into the separate letters. A “Tally Table” (a table of sequential numbers starting with 1), and the SUBSTRING function to get each letter will do this. This part of the code is:

The “Tens” Common Table Expression (CTE) creates ten rows of a digit. The “Hundreds” CTE just CROSS JOINs the “Tens” CTE together twice, created 100 rows. The “Millions” CTE CROSS JOINs the “Hundreds” CTE together three times, creating one million rows. The “Tally” CTE uses the ROW_NUMBER() function to assign a sequential number for each of those one million rows, starting with 1 and going to, you guessed it, 1 million.

The “cte1” CTE is the file load that we did earlier. In “cte2”, the “tally” CTE is essentially joined to the file load cte (“cte1”) for each row. The TOP (DataSize) limits the number of values returned, to get just the numbers from 1 to the number of characters. Then the SUBSTRING function gets one character at a time, starting with the first character and going through the last character.

This query has the following results: 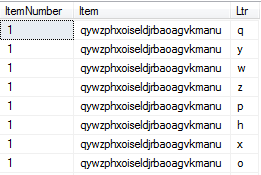 Next we need to count each letter in each Box ID, and to pivot the results back into one row for each Box ID. The COUNT() function, with the GROUP BY clause, counts each letter by Box ID. The pivot utilizes the MAX function with an embedded CASE statement to determine if that Box ID has any occurrences of a letter occurring 2 or 3 times. This query is:

Count Letters, Pivot back to one row
Transact-SQL

The results of this query are:

To calculate the checksum, we just need to add up the Has3 and Has2 columns, and then multiply those calculations against each other:

And this provides us with the Checksum. Part 2 unlocks after entering this value.

To find the two boxes, we need to find two Box IDs with a similar ID. The definition of “similar” is that the Box ID values are the same except for one letter, and that letter is in the same position for both Box IDs. For this puzzle, we need to return the common letters of those two Box IDs.

Get all possible common letters, find the ones that are common
Transact-SQL

The “cte2” CTE gets the letter position and all letters before and after that position. The final SELECT does the grouping and returns the rows with common letters.

And here we have a T-SQL solution for Day 2 of the Advent of Code challenge. The key tasks that we can learn from today are: