What were you thinking (hidden relationship)??? 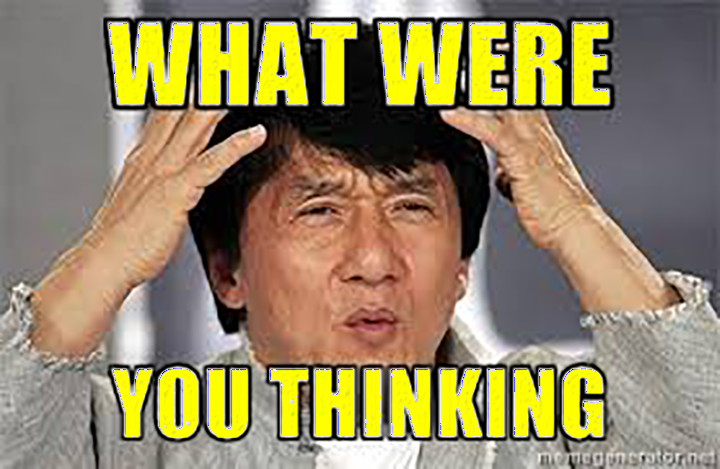 What were you thinking?

Have you ever been working on some code from another person, and you end up scratching your head wondering “What were you thinking”? Maybe even thinking this with some “#$%^&*” thrown in? I recently ran into a hidden relationship that made me do exactly this.

I was recently working with a client to reverse-engineer a report from a third-party’s software so that it could be exported to an Excel spreadsheet. This report has parent and child data in it, and I was able to find all the data – and it was all in one table. It took me a while to figure out the relationship between the parent row and the child rows. I finally figured it out … the third-party has a column with obfuscated data that has the ID numbers of the related child records. This post will show you why this is not a good idea, and what a better solution is.

The “rows” with all zero’s are not used. From the report generated by the application, I could see that for this parent row it has child rows with ID #’s 3, 4 & 1000646 (determined by looking at the data in the table).

The first two rows have the appearance of being for ID #’s 3 and 4. The third row looks like a hexadecimal representation of a number. Entering this into calculator.exe and converting hex to decimal did not give the proper ID #, so I needed to figure out how this would work.

For the next attempt at cracking this value, I simply reversed the string. Nope, that didn’t work.

Failing that, I decided to reverse this string two bytes at a time. That is, the reversed string becomes “0000000F44C6”. When entered into calculator.exe and converted from hex to decimal, this did generate the correct value. Tests of several other records shows that this process seems to work for all the parent rows.

The next step is to generate a query to do all of this for me. Using a series of CROSS APPLY operators, I was able to extract the 8 sets of characters using the SUBSTRING function. Next, each of those are byte-reversed, converted to varbinary, then to an integer. Joining this number back to the ID number produces the necessary results. This looks something like:

Why this isn’t such a good method

Earlier, I promised to talk about why this isn’t a good idea. In fact, this is a horrible way to do this, for several reasons:

Firstly, use a foreign-key relationship to enforce the parent-child relationship. That is impossible to do in this method.

Secondly, because there is not a foreign key relationship, a child record could be deleted without updating the parent record to reflect it.

Thirdly, this method requires the application maintains the referential integrity of the parent-child relationship, which involves updating the parent row with what the child rows are for it.

Finally, optimization of the query is not possible. As implemented, the application needs to retrieve the parent rows. Then it needs to crack this obfuscated record ID, and get the child records. The application retrieves the data in a row-by-agonizing-row method from the database.

A proper implementation is to create a table with a many-to-many relationship (called M-M table for this post). This M-M table would have just two columns; one holds the ID number for the parent table, and the other holding the ID number for each child record.

Next, we take a look at referential integrity. This M-M table should have a PRIMARY KEY constraint on these two columns, which will both prevent duplicate child records for each parent record, and give an index into this table to optimize the query. A foreign key relationship from the primary table to this table (on the parent column), then another foreign key from this table (on the child column) back to the primary table, enforces the referential integrity.

Which would you rather see and work with???

Why wasn’t this method used? I can think of a couple of reasons:

Just because you can do something doesn’t mean that you should do it. I’ve already gone over the reasons for why this isn’t a good idea. Just keep it simple.