Working with the registry from within SQL Server

There is a lot of information within the Windows registry. Sometimes, it would sure be nice to work with the registry within your T-SQL scripts. As it turns out, there are a bunch of undocumented extended stored procedures that do just this. A listing of these procedures are:


As you can see, there are two categories of extended stored procedures that we can use, with complimentary procedures between them. The “Instance-Aware” category procedures utilizes key word substitution in order to navigate to the appropriate registry keys for the SQL Server instance that is running. I’ll show you an example shortly.

Before we go too much further, lets explain a few key phrases when dealing with the registry:

Registry: The registry is a hierarchical database used by Windows. It is organized in a tree view manner.

Registry Hive: A hive is a logical group of keys, subkeys, and values in the registry that has a set of supporting files containing backups of its data.

Examples of Registry Hives are:


Of all of these hives, you will probably use HKEY_LOCAL_MACHINE and HKEY_CURRENT_USER the most.

Registry Key: A node within a registry hive is called a key. A key can contain both sub-keys and values. Sometimes an application will only be looking for the presence of a key; at other times it will need to look at the value.

Registry Value: A registry value is simply a piece of data, of any data type.

The following image shows the tree view layout of the registry, and identifies the various items within it: 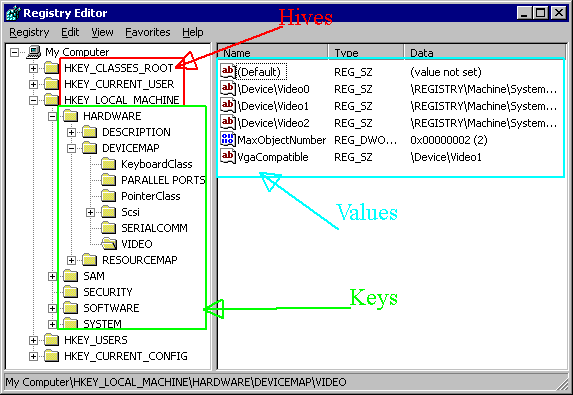 Querying the registry from SQL Server

Let’s start off by querying some data within SQL Server. I have an instance of SQL Server named “SQL2014” (would you care to take a guess as to what version of SQL Server this is?). One of the items stored in the registry is the location of the SQL Agent working directory. These procedures can query the registry and return the specified values. For example:

When I execute this statement, SQL returns the following result:

In order for you to run this, you may need to change the key as appropriate for the version and instance on your server. The result includes both the value, and the data for the specified path.

In this example, I used xp_regread to read the direct registry path. If you remember from earlier, there are SQL Server instance-aware versions of each registry procedure. A comparable statement using the instance-aware procedure would be:

This statement returns the exact same information. Let’s look at the difference between these – in the first query, the registry path is the exact registry path needed, and it includes “\Microsoft SQL Server\MSSQL12.SQL2014\”. In the latter query, this string is replaced with “\MSSQLSERVER\”. Since the latter function is instance aware, it replaces the “MSSQLSERVER” with the exact registry path necessary for this instance of SQL Server. Pretty neat, isn’t it? This allows you to have a script that will run properly regardless of the instance that it is being run on. The rest of the examples in this post will utilize the instance-aware procedures to make it easier for you to follow along and run these yourself.

You would think that if you specify either NULL or an empty string for the third parameter, that you could send whether the key exists to an output variable – however, I have not been able to figure out a way to accomplish this. Specifying either of these values results in an error when running this statement. If you know how to do this, please leave a remark so that this post can be updated with that information.

These procedures will enumerate through all of the values of the specified key, returning a separate result set for each value. For instance, the following statement will return all of the values in the above SQLServerAgent key:

Having all of these result sets makes it difficult to work with this procedure. Thankfully, you can put these all into one result set – just create a temporary table (or table variable) to hold the output, and then use INSERT / EXECUTE to fill it, like the following example does:

Now that all of the results are in one result set, you can work with it a bit easier.

Modifying the registry from within SQL Server

Up to this point, we have focused on retrieving data from the registry. What if you want to modify the registry? Read on… be forewarned that the following procedures are modifying the registry, which means that they can also damage the registry, possibly rendering the server unusable. Use at your own risk!

These procedures are used to delete a specified value from the registry. In this example, the “MyNewValue” value will be deleted. The example first enumerates through all of the values in this key (just the one), deletes the value, enumerates through them again (since there are no values, there will be no result set), and then finally shows that the key is still present.

These procedures are used to delete an entire key from the registry. In this example, the script will first add another new key under “MyNewKey”, and a value in that new key. The script then deletes both the “AnotherNewKey” (which deletes the value just added also) and “MyNewKey” keys and finally shows that both keys have been deleted. Note that in order to delete a key, it cannot have any sub-keys, which is why the script deletes “AnotherNewKey” first (try running the script first by commenting out the first xp_instance_regdeletekey to see that it must be empty).

These procedures are used to add a string to a multi-string entry in the registry, or to create a multi-string registry entry. In this example, I’ll call the procedure twice. The first time will create the entry with one string in it, and the second time will add a second string to it. Then the example will show the results of this value.

Did you notice that the regread procedure got a little confused here? It has two value columns (which is the name of the value), but the second one has the data for the first one. Then the data column is null. If a third string is added, it still returns just these three columns. To see that we actually added these strings, we’ll have to use regedit.exe: 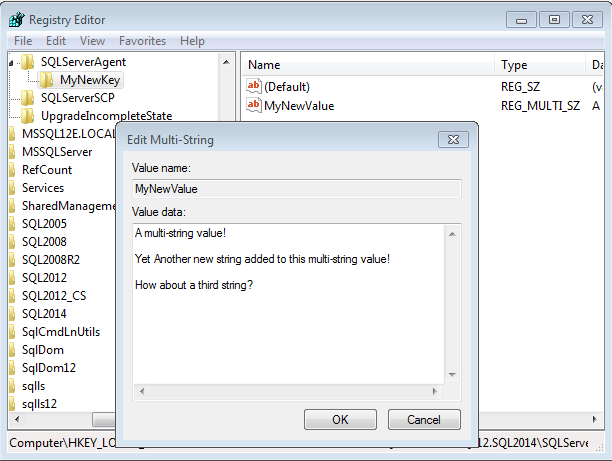 These procedures are used to remove a string from a multi-string entry. This example will remove the middle string.

And finally, let’s ensure that things are cleaned up:

With the exception of removing and reading the multi-string values, these extended stored procedures all work pretty well. We’ve been able to read registry values, and to enumerate through a list of keys and values. Keys and values can be created and deleted.

If you try to use the procedures in sections outside of SQL Server keys, you may run into registry security problems where the SQL Server service account doesn’t have permissions to accomplish the task. On the internet, you will find articles telling you to add the service account to the local administrators group (and to restart the service). This is a VERY BAD IDEA – by doing this, the server can be completely compromised – you will be allowed to do anything that you desire on the server. Instead, use regedt32.exe, which will allow you to modify the permissions on the key that where you are having access issues.

I close by repeating my warning from above – be very careful when modifying the registry. It is possible to corrupt the registry to the point where the server will no longer function. To recover, an operating system reinstall will be necessary.

As a footnote on working with the instance-aware installation. I recall seeing on the internet other keywords that could be substituted instead of MSSQLSERVER. One of them is SQLServerAgent. However, I can’t find any others right now. If you happen to know of other keywords that work, please reply to this post so that it can be added to this post.