What’s been happening in Wayne’s World

Late last year, my life got strange. Well, it’s always been strange, so let’s just say it became stranger than normal. I started working on a project with a few folks, and that scarce commodity known as time became even more scarce to me.

Things that I’ve been trying to do (get more involved on online forums and social media) took a back burner. Writing more articles for SQLServerCentral got dropped. Trying to blog more… stopped. Outings with my wife… disappeared. As this project moved on, days and nights seemed to merge. Sleep? That’s only something you get to do when you have the time to do so. (I think that the only thing that didn’t come to a complete stop was presenting at SQL Saturday’s and user groups, but even these slowed down.)

Like all projects, it suffered from scope creep. It didn’t help that I went on a SQL Cruise to Alaska during this time (note to self: I need to blog about this also). Things that had been figured out ended up being thrown out the window. Priorities changed – sometimes while priorities were changing. However, like all projects, we persevered and things eventually came around to a close. And while the project isn’t completely finished yet, most of the work that I need to do is done. And so, I find myself finally able to take a breath, look up, and see the world around me once again.

So, what is it that I’ve been so busy with that it completely took over my life? Well, a few guys got together and ending up writing a book. Yep, that’s right… we wrote a book. Besides myself, this group of co-authors consisted of Jason Brimhall (b/t), David Dye (t), Jonathan Gennick (b/t) and Andy Roberts (t). 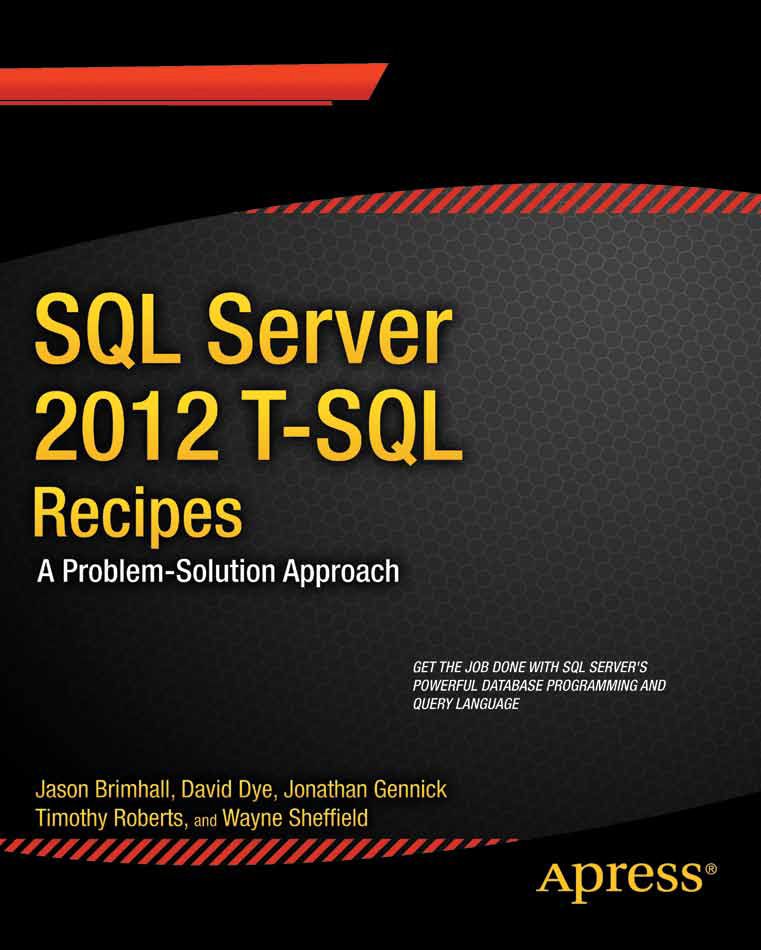 The entire book follows a simple pattern – Problem, Solution, How it works. You have a problem. Here is T-SQL code that provides a solution (sometimes with alternative solutions). Then the solution(s) are discussed in regards to how it works. In some cases older solutions are discussed in order to show how a newer feature simplifies or ramps up the performance of the code. This book ranges from simple to advanced topics, so there is something for everyone here.

Perhaps you remember that the SQL Server Recipe series of books for previous versions of SQL Server were written by Joe Sack (b/t)… I want to thank Joe for allowing us to advance this series of books with SQL Server 2012, and for the technical review that he did on this book. Also performing technical reviews were Alistair Aitchison and Jay Visnansky. And of course, the whole group at Apress, for keeping all of us aspiring authors in check and focused. These include Jonathan, Douglas Pundick, Brent Dubi and Kevin Shea.

This book can be pre-ordered now (from Apress or Amazon), and it is due to be published on August 22, 2012.

With SQL Server 2012 being fresh and foremost on everyone’s mind, there are a whole slew of books coming out that are digging in to what it does and what has changed.