Maybe you’re the type of SQL person that digs into execution plans. If so, you might have noticed that when you hover over an operator, that in the popup is an entry for “Actual Rebinds” and “Actual Rewinds” – and that they are usually 0. In this post, we will explore what a rebind / rewind is, when they are used, and how they differ from each other.

If your query has correlated values being passed from one object to another, then every time the value changes, the operator must be reevaluated. When this happens, the Init() method is called. The Rebind property counts the number of times that this reevalaution was necessary (the number of times that the Init() method was called). This will also be the number of unique sets of data in the outer query being passed to the inner query.
A Rewind simply means that the set of correlated values were not changed, so the inner result set can be reused.

Additionally, Rebinds / Rewinds will only be present on operators on the inner side of a loop join.

Now that we know what a Rebind / Rewind is, let’s see this in action. For this test, we’ll use the AdventureWorks database.
In the Person.BusinessEntityAddress table, there are a few values for AddressTypeID. These values are defined in the Person.AddressType table.
To see the values, run this query:

Running this query will show that there are three unique values, and the number of rows for each of these values. Additionally, the “WITH CUBE” returns a total row.

Since a Table-valued Function will allow a Rebind / Rewind, here is a short multi-statment table-valued function that will get the Name of the AddressType from the Person.AddressType table:

Now let’s turn on the Actual Execution plan, and then run the following query:

When you look at the execution plan and hover over the Table-valued Function operator, you will see: 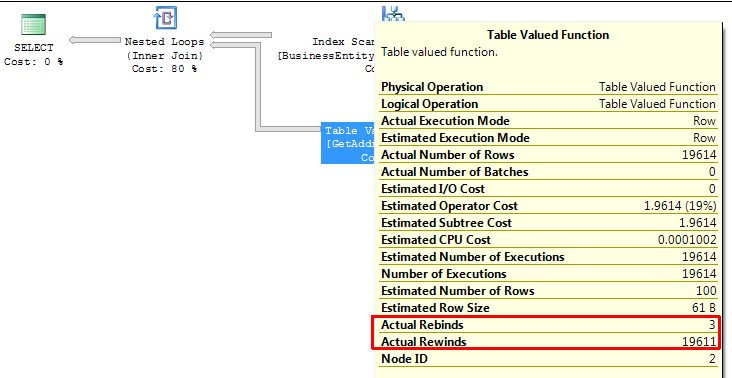 From the first query, we can see that we had three unique AddressTypeID values. Since the query is ordered by AddressTypeID, every time the value changed, a Rebind occurred. However, as long as the AddressTypeID value doesn’t change, other rows will trigger a rewind – to reuse the result set from the function with that value. The sum of the Rebinds and Rewinds is the number of rows applied to the operator from the outer query.

When you look at the IO statistics on the Messages tab, we can see that a table variable had 3 scans, for a total number of logical reads of the same number of rows that were applied to the function.

If the values were not in the AddressTypeID order, then additional rebinds might have to occur. Let’s change the query to:

When it is run, it will now show:

Since the AddressTypeID is in a more random order now, every time the value changed, the Table-valued Function operator had to be reinitialized. Obviously, the more rebinds you have, the more work that SQL Server needs to do when re-initializing.

How do different types of functions compare performance wise?