This month’s T-SQL Tuesday is hosted by Jason Brimhall. Being as this is January, lots of people are making New Year’s resolutions. Well, Jason doesn’t want to hear about that… but he does want to know how you have stood firm by a story that utilizes “resolve”, “resolute” or “resolution”. 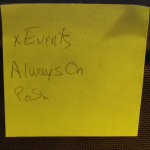 Last year, in my quest for learning more about SQL Server to obtain my eventual goal of becoming a MCM, I identified three areas of SQL Server that I wanted to learn about further. I have these three topics on a post-it note hanging off the bottom of my monitor to constantly remind me to further my knowledge in these areas. And I resolved to learn about these topics, and to find ways to utilize these areas.

During the course of the past year, I’ve worked with two of these topics. I’ve attended training sessions at SQL Saturdays and at the PASS Summit on these topics. I’ve used both Extended Events and PowerShell for a few items, and I’m leaning towards using them whenever possible. I’ve used Extended Events to identify dropped connections, and PowerShell to get various things like Drive Partition Information, Volume Defragmentation Status, scripting out of all indexes in a database and getting all of the accounts running SQL Services.

I just read a SQLSkills Insider email from Paul Randal where one of the things that he wants to learn about SQL Server that he doesn’t already know is PowerShell. He mentioned that he likes to learn in little bits at a time, and referenced many of the bloggers that have a series (usually a month long) on a subject. But, surprisingly, a series on PowerShell hasn’t been done. So, in that vein of thought, I resolve to blog a series on PowerShell. Look for it in the near future.